Córdoba is hosting a spectacular exhibition that shows an innovative vision of the Christianization process developed from the end of the Roman Empire until the arrival of Islam. More than 200 iconic works from the most prestigious international cultural institutions, such as the Vatican Museums or the National Museum of Carthage, among others, come together for the first time to shed light on one of the lesser-known periods in the Mediterranean world. Unique archaeological pieces that, together with the most up-to-date technologies (immersive videos, QR codes, animated graphic projections), transport the visitor to an exciting Era of cultural and political transformations that left an intense mark on Western culture and from which Córdoba was featured protagonist. A unique opportunity to discover the era that laid the foundations of Medieval Europe.

· At the Center for Contemporary Creation of Andalusia (C3A), the oldest pieces of the new iconography and the development of the new religion in the Mediterranean are presented.

· In the VIMCORSA Room, the main characteristics and evolution of Christianity in the city of Córdoba are shown.

· And in this historical and Mediterranean context, at the headquarters of the Mosque-Cathedral the main novelties that current research is contributing about the episcopal complex of Córdoba, the nerve center of the city since then and which will remain as the headquarters of the religious power throughout the Middle Ages. Pieces from ancient excavations, materials reused in the construction of successive religious buildings and unpublished data on this large urban sector in late antiquity are shown here.

A time full of transformations: climatic and environmental, economic, political and social, partly comparable to the period in which we live today, not by chance also defined by Pope Francis as an era of change. A change of era. 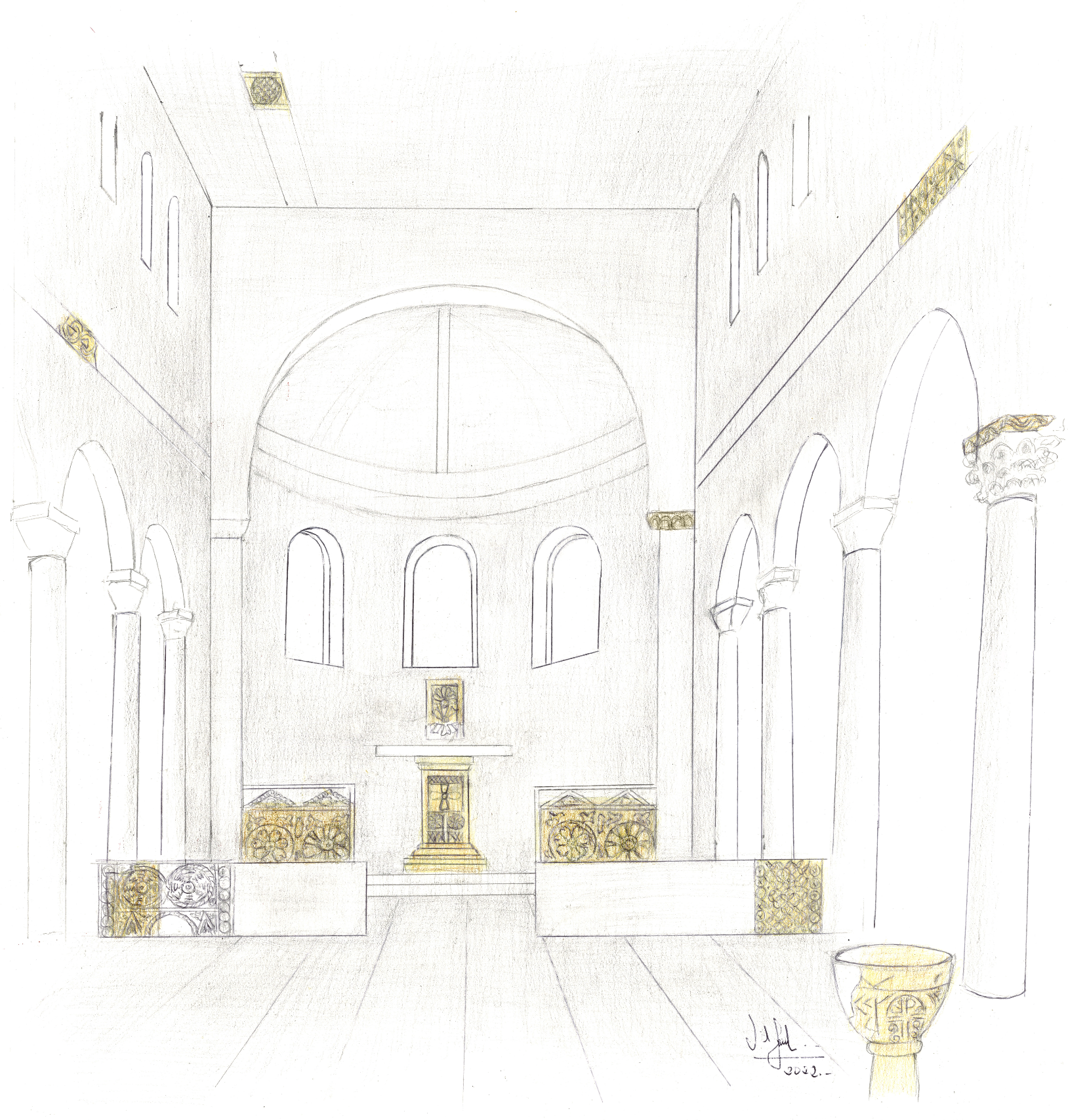 1. The first excavations under the mosque

Between 1931 and 1936, explorations were carried out in the subsoil of the Mosque-Cathedral with the aim of locating the remains of the church of San Vicente, mentioned by several Islamic written sources. Inside the oratory, the intervention focused on the western area of the Abd al-Rahman I mosque; in the patio the western third was excavated. The excavated areas inside were covered in 1933 and in the courtyard in July 1936, coinciding with the outbreak of the Civil War. The data from these interventions remained unpublished for decades or were very partially treated, which has generated a highly distorted image of the entity of the remains discovered.

3. From a simple church to an episcopal complex

There is no late-antique written news (4th-8th century) about the area occupied by the buildings linked to the episcopal seat of Córdoba. The only documentary data is from the Islamic period and refers only to the main church of the city under the name of San Vicente. However, as happens in all cities that were the seat of a bishop, the episcopal group was, in reality, a large urban sector made up of a set of buildings with various functions. On the one hand, the strictly liturgical ones, such as the episcopal church and the baptistery, as well as the rooms where the bishop's public activities were held. On the other, there were spaces for many other activities: warehouses, archives, residences, craft spaces and, in some cases, not always, cemeteries. In short, they were authentic Christian urban sectors, sometimes very extensive, which occupied an important part of the interior of the city.

4. The episcopal complex of Córdoba

The material testimonies confirm the existence in the southern sector of Córdoba of a wide set of monumental structures that can be identified with the episcopal complex of the late ancient city. Archaeological research makes it possible to distinguish, even in a very generic way, three large areas within this set:

- In the Patio de los Naranjos there is a monumental building, enlarged and transformed between the 5th and 7th centuries, which can be identified as a space for the reception and representation of the bishop

- Some of the more strictly religious buildings were located under the Islamic oratory: the main church and some of its associated facilities

- The southernmost area, next to the walls, the river and the bridge, seems to be occupied by commercial establishments, maintaining a secular economic function

This set is the result of more than three centuries of uninterrupted occupation by the religious authority of the city.

The current intervention in the Patio de los Naranjos is making it possible to reconstruct a complete sequence of occupation of the episcopal complex in late antiquity, the nerve center of the city between the 4th and 7th centuries.

The documented structures are part of a monumental building dating from the 5th century AD, decorated with mosaic pavement and paintings on the walls. In the 6th century it was transformed with the incorporation of a semicircular apse and partitioning walls made with a mixed technique of bricks and ashlars (opus vittatum mixtum). In a later phase (VI-VII century) a new entrance to the building was incorporated from the west through an arcaded vestibule, topped at both ends by semicircular exedras.

After the Muslim conquest of Córdoba, the complex was dismantled and looted to reuse the construction materials, the ground level was raised considerably and some structures were built prior to the Islamic oratory.

The clearest indications of the existence of a church under the mosque were located in the explorations of 1932, next to the western columns of the central nave. They correspond to the remains of a mosaic pavement, currently hidden under the ground, associated with masonry structures, oriented perpendicular to the Islamic oratory. In its decoration, one can appreciate, on the one hand, a pattern of alternating black and white rhombuses, corresponding to a space between columns; on the other hand, the central decorative scheme is made up of octagons defined by braids whose vertices are arranged with squares decorated with motifs of cruciform leaves and lilies and whose outer sides are distributed leaves with five lobes. It shows an exceptional scheme, unprecedented in the Iberian Peninsula, but with several examples in churches in the central area of the Mediterranean, with a chronology from the second half of the 6th century.

If you continue browsing, we will assume that you have accepted their use More information